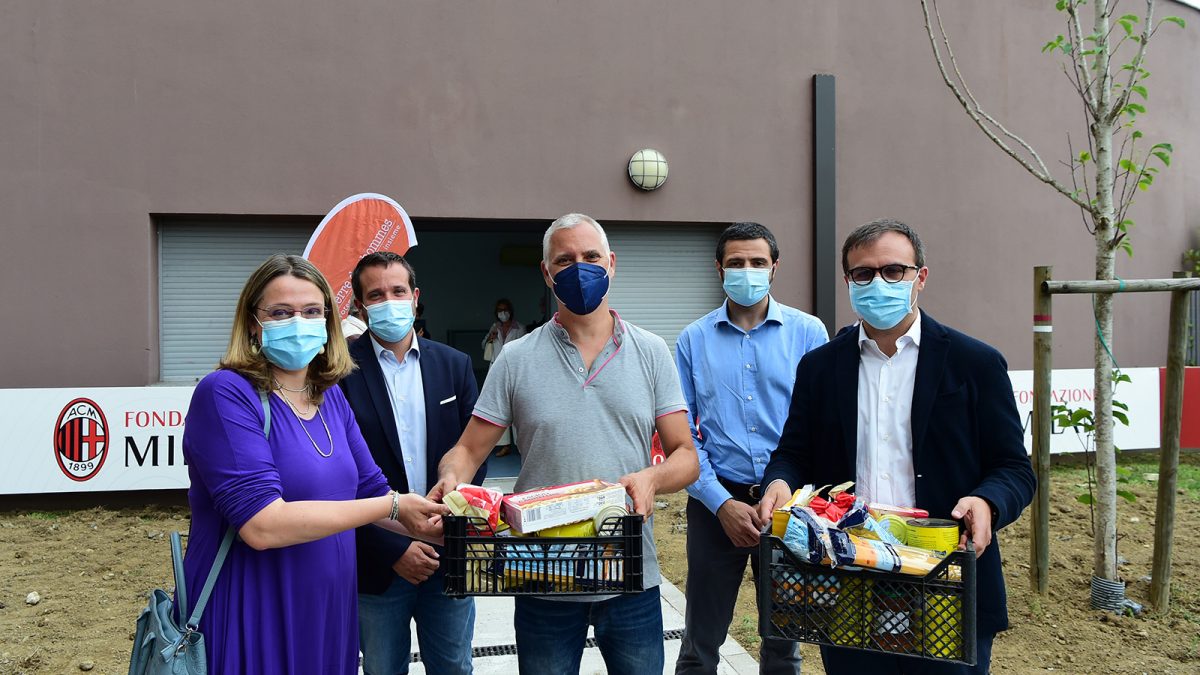 A project made possible thanks to the generosity of the great Rossoneri family, whose contribution was collected in the Fondazione’s “Assist” programme, on the occasion of the “Derby Together” initiative during the 20/21 season.
Objective: to reach 60 tons of food per year, equivalent to 220 thousand meals.

Milan, July 15th 2020 – The ribbon has been cut at the new Hub di Quartiere in Gallaratese (Municipality 8, Milan), which aims to tackle food waste. It is a new space donated to the city by the Fondazione Milan, together with the City of Milan. The goal is to help the most fragile sects of the population, with particular attention paid to the demands of women and children.

The inception of this new Hub comes with a desire to collect 60 tonnes of food per year, which is akin to about 220,000 meals. It builds on two such initiatives already ongoing in the city (in Isola, Municipality 9, and Lambrate, Municipality 3) that today guarantee the collection and redistribution of around 20 tonnes of food a month (equivalent to 40,000 meals). In addition to this food collection programme, the initiative will also provide a fair trade market and educational courses for women and children who find themselves in difficulty.

The project was made possible thanks to a generous €75,000 contribution from the Fondazione Milan, which allowed for the restructuring and regeneration of the Via Appennini space in Milan. It was a help that came directly from the heart of the great Rossoneri family through the Derby Together initiative, with which the Club, last February, asked its supporters around the world to fill the San Siro virtually and thus support the Foundation’s “Assist” programme, a series of charitable initiatives revolving around community. In particular, it aimed to help the most vulnerable and needy. The Hub in Gallaratese represents the initiative’s most important project of this year.

“We can’t wait to see the Hub in full swing. It will be a meeting point for the people who live in the area thanks to a new concept which integrates many different aspects, one which is designed to bring about social inclusion on the basis of aid and food provision,” said Anna Scavuzzo, Deputy Mayor of Milan in charge of Food Policy, and Gabriele Rabaiotti, Councillor for Social and Housing Policies.

“We’re proud to have contributed to such an important project for the city as we support the Milan City Council’s Food Policy. The Fondazione Milan is increasingly becoming a point of reference for the most vulnerable groups, responding to the growing needs of the communities in the area,” explained Fondazione Milan President Paolo Scaroni. “We’ve been able to provide this help thanks to the tremendous generosity of the Rossoneri family. I’d therefore like to take this opportunity to thank, on behalf of the Club, all the supporters who participated in the “Derby Together” initiative. Today’s inauguration is a positive example of the importance of public and private entities joining forces for the benefit of the community, with this also applying to ordinary citizens.”

The project will involve close cooperation between the Fondazione Milan, the City Administration, institutional partners such as the Polytechnic University of Milan, Assolombarda and the Fondazione Cariplo, as well as other technical partners. The new multi-purpose space will be managed by the Fondazione Terre des Hommes, which is already involved in the new Food Aid System in Municipalities 7 and 8. The new Hub will be particularly dedicated to the youngest members of society, i.e. families with children and infants, and will become a collection centre not only for food but also for baby products.

“The new Hub is testament to Fondazione Milan’s constant commitment to supporting the community,” said Rocco Giorgianni, Fondazione Milan’s Secretary General. “This project is part of the broader Assist programme that we launched this year in light of the crisis linked to the current pandemic, which has led to an increase in the number of people experiencing economic and social hardship.”

Social contest: an increase in poverty due to the Covid-19 pandemic
In Italy, as in the rest of the world, the health emergency caused by the outbreak of the Covid-19 pandemic has had serious consequences that have affected and deteriorated the social and economic fabric of the country. The increase in the poverty rate and in the so-called ‘new poor’ (a rise from 31% to 45% in Italy) as a result of the emergency is greatly concerning. Many workers and families have experienced hardship for the first time and have therefore had to turn to local Third Sector organisations for support. The pandemic has also led to a widening of social inequalities, hitting those who were already experiencing economic difficulties the hardest. Finally, the employment rate of women has plummeted, falling more than twice as fast as that of men in recent months. The large gender gap and female unemployment result in a decrease in family income, especially for those with children and minors.  The situation therefore requires a greater social compromise to support families and the youngest members of society, and this is why the Fondazione Milan has been involved in the creation of the third food hub in the city of Milan, one which is dedicated to them.