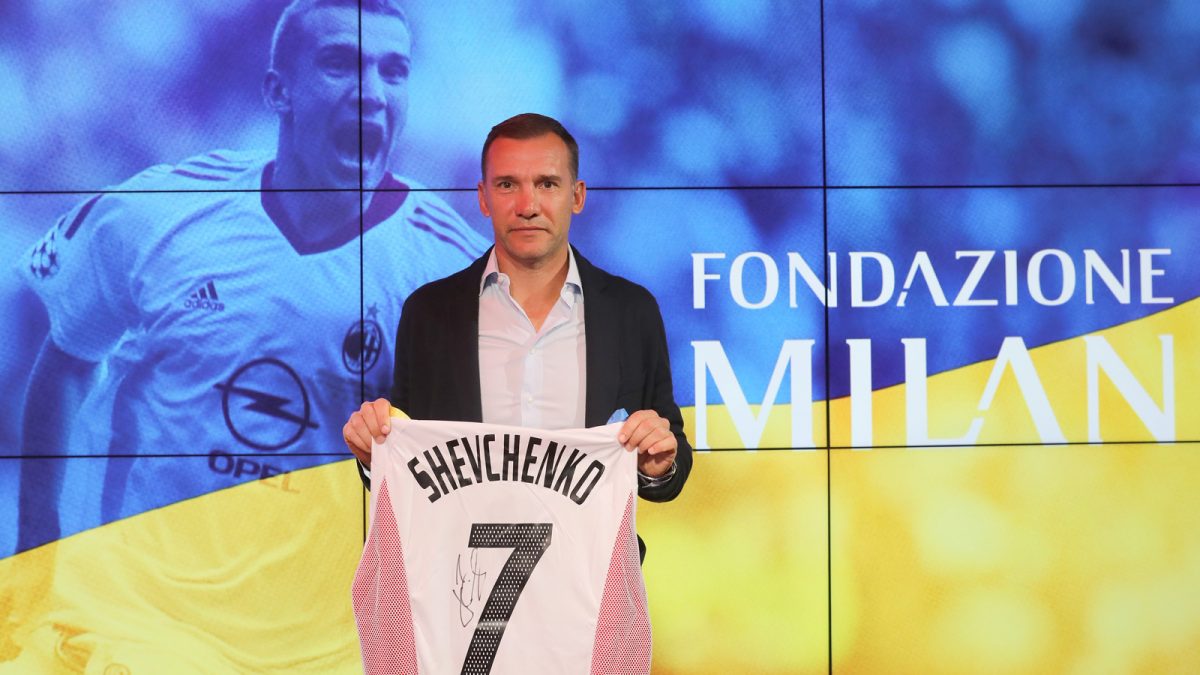 Milan, 21 September 2022 – As proof of the attention paid to major social issues and emergency situations around the world, from Afghanistan to Lebanon, up to the recent global pandemic, for over six months AC Milan and Fondazione Milan have been committed to supporting the Ukrainian population through a series of concrete initiatives, united under the ‘AC Milan for Peace’ programme. From fundraising to the collection of material goods, passing through charity auctions and the opening of a telephone listening and guidance service, Special Camps for the youngest fans and the creation of the Special Edition jersey – Manchester 2003 for Ukraine, which has seen the support of a legend of the Rossoneri Club such as Andriy Shevchenko.

To thank Fondazione Milan and the entire Rossoneri family for their support to people affected by the conflict on the International Day of Peace, today the 2004 Ballon d’Or winner visited Casa Milan offices and welcomed the fans, autographing their shirts from the special collection, inspired by the one worn by the former Rossoneri number 7 during the 2002/03 Champions League final won at the Old Trafford stadium in Manchester and enriched with the colours of the Ukrainian flag, the words ‘AC Milan for Peace’ and the symbol of peace.

The initiative was immediately welcomed with great enthusiasm by the Rossoneri fans, who sold out the first shirts made available in just a few days, allowing to gift over 200,000 euros to finance projects and aid for the population affected by the conflict. The last jerseys of the collection are now available again in the Casa Milan store and online, and the proceeds will continue to finance projects to support the Ukrainian population. It was Shevchenko himself who announced today that, among these, Fondazione Milan will be committed to contributing to the reconstruction of the Central City Stadium in Irpin, a city in the Kiev oblast that has been profoundly devastated by the bombing.

The support of AC Milan and its foundation for the women and men affected by the conflict was first seen on the pitch and in the stands during the Coppa Italia Derby on 1 March, immediately setting up a secure fundraising channel for the Italian Red Cross, which has been working alongside the Ukrainian Red Cross, and the other National Red Cross Societies, to respond to the humanitarian needs of the Ukrainian population. The collection, still open on the dedicated site and built on an important donation from Fondazione Milan, has provided and continues to provide first aid kits, medicines and material for the people affected by the war. This is thanks to the agreement between institutions whose credibility guarantees each donor the certainty of being able to make a real difference.

A collection of basic necessities has also been made at Casa Milan, and the Milanello and PUMA House of Football Sports Centres, with the passionate participation of the Club’s employees and members, who collected more than a tonne of food, children’s, medical and sanitary goods on dedicated days. More than 100 parcels collected were partly sent directly to the conflict zones and partly delivered to the associations that take in Ukrainian refugees in the Milan area.

The Italian Red Cross received the proceeds from the charity auctions held for the PUMA warm-up jerseys worn and autographed by the players of the men’s First Team during the 2021/22 Coppa Italia semi-final first-leg against Inter. The same happened with the match jerseys used by the women’s First Team in the home league match against Juventus, also worn and autographed by the players.

In collaboration with the Municipality of Milan and, once again, with Andriy Shevchenko, Fondazione Milan has also supported the creation of a telephone listening and guidance service in Ukrainian in order to promote the integration of refugee families in the Lombard capital. The switchboard, active from Monday to Friday from 9am to 6pm, provides, among other things, support to refugees in registering for childcare and schooling services, information on the management of DaD from Italy and guidance on the procedures for applying for and obtaining a residence permit.

In the summer, as part of the ‘Ukraine emergency Special Camp’ project, AC Milan Academy and Fondazione Milan also welcomed children from the conflict zones to some Italian locations of Junior Milan Camp, giving them a special experience of fun and games.

“A constant concern for major social issues and support for various emergency situations around the world are part of the DNA our Club – said Paolo Scaroni, AC Milan and Fondazione Milan’s Chairman – which as a social institution feels the responsibility to contribute through concrete actions to promote positive change in society. We are proud to stand alongside a legend such as Shevchenko in supporting those most in need and the new project in Irpin, as well as his pleasant visit today, testifies our will to continue this journey together”.