From Milan To The World: Fondazione Milan awards Alice For Children 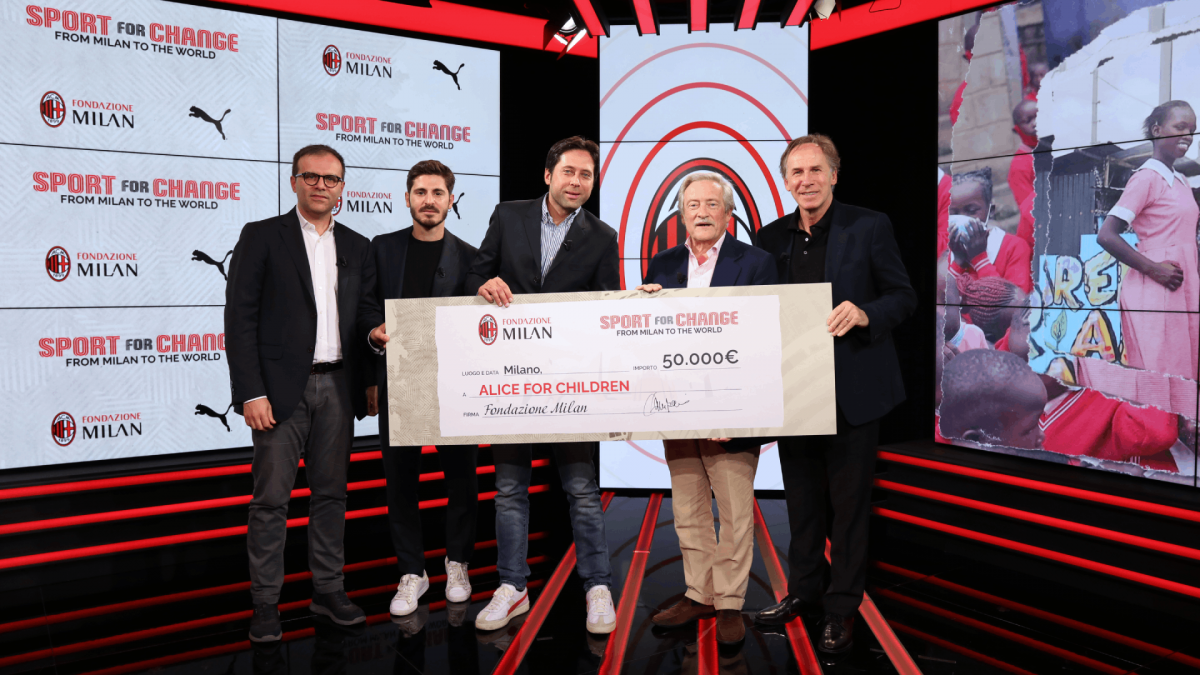 Milan, 19 November 2021 – AC Milan and Fondazione Milan are delighted to announce the winner of “From Milan to the World”, the international charity contest that invited the Rossoneri fans across the globe to learn about six socio-educational projects in six different cities, carried out by as many different organisations, and vote their favourite.

The projects taking part in the contest – all united by a belief that sport can be a tool for change, education and inclusion – received over 27,000 votes in total, 53.2% of which went to Alice for Children. The latter presented a sporting project that aims to respond to the needs of girls living in the slums of Nairobi, the capital of Kenya, helping them chase their dreams. For the past 15 years, the organisation has been providing food, clothing and medical and educational support to 2,500 children that have been removed from child labour. The €50,000 prize will support Alice for Children in their activities and the development of the proposed project in a city of five million citizens, 60% of whom live in the 110 slams that surround the city centre. Here, the rate of AIDS infection is 60% and mainly affects women and children. 26% of children between the age of 5 and 14 work in extreme conditions: 12 hours a day for less than 2 dollars; 300,000 children – of which 60,000 live out on the street, the so-called “street children” – and around 6,000 of them work in Dandora dump, the biggest open-air dumpsite in Africa and the most polluted in the world.

The donation will help Alice for Children to implement a vast programme of medical and psychophysical support aimed at valuing girls and combating sexual and psychological abuse, female genital mutilation and early pregnancy. The Alice for Children project is set to involve over 1,300 girls from ages 10 to 18, who attend six schools in the slums, with the aim to create the very first football league for girls who live in the slums of Nairobi. Eight teams will participate in this tournament and will play against each other each weekend. For the opening of the league and the finals, events and activities will also be hosted for the whole community to raise awareness and educate the youth on themes related to gender equality and respect for human rights.

The foundation of the initiative is the belief that sport can become the perfect tool to allow girls to become – in the future – strong and independent women. The competition on the pitch will become a pretext to the recognition of the girls’ own strength and value, allowing them to learn how to fight for their own rights and a more inclusive society.

Franco Baresi, Honorary Vice-President of AC Milan and Fondazione Milan Ambassadorsaid: “AC Milan is a family, which is of course deeply rooted in our local area but also pays close attention to the international community through the work done by Fondazione Milan, who have been working tirelessly since 2003 to promote sport and its values in various social projects throughout the world. It is for this reason that we are proud to support a project as noble as this one, which puts sport at the heart of change and solidarity.”

Rocco Giorgianni, General Secretary of Fondazione Milan, said: “We are proud to see how this contest has played out and the enormous global participation and also to be able to award Alice for Children. Their proposal reflects our ideals of sport as an instrument for inclusion and change, as did all the other projects that will also be supported this year.”

“The victory of the contest represents the culmination of a 10-year long collaboration between Alice for Children and Fondazione Milan, which started with the first football tournament in the slums of Nairobi.” – added Diego Masi, President of Alice for Children, who picked up the Award at the Rossoneri’s The Studios, located in AC Milan’s headquarter in Milan – “It is thanks to this long-lasting collaboration that we have experienced first-hand how sport can make a difference, break down barriers and help our boys and girls to believe more in themselves. Sport can change a community for the better; and thanks to this victory we will be able to continue making a difference, giving hope to girls who live in the slums.”

From Milan to the World – the charity contest created in partnership with PUMA – was announced in July coinciding with the launch of AC Milan’s 2021/22 Away Kit. The jersey itself is dedicated to Fondazione Milan and embodies the vision and common values of the Club and its charity, which promote sport as a tool for social change, education and inclusion both in the local area and throughout the world.

The initiative is aligned with AC Milan’s RespAct Manifesto, which which embodies the Club’s vision and commitment to sharing the positive values ​​of sport and fighting all forms of prejudice and discrimination.

Food Hub: presentation of personal services and activities for the Ukraine emergency